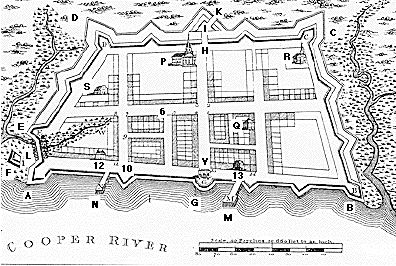 The best description and history of the walled city of Charleston is provided by Historic Charleston Foundation, which has spent a lot of time on this subject. Katherine Pemberton of HCF also chaired the Mayor’s Walled City Task Force, which has a detailed website. They even have a Facebook page.  Katherine has written an extensive and detailed report on the city’s wall, which you can find here.

Unfortunately, the remains of the wall are not visible on the streets (a portion is visible in the basement of the Old Exchange Building) — although in their excavations on East Bay Street, the Task Force left a representation on the street surface of what they found, as well as a very informative informational sign.  (The site is at intersection of East Bay Street and South Adger’s Wharf at the foot of Tradd Street. The sign is on East Bay Street and the bricked representation of the wall is in the parking lot behind it.)

It’s a fascinating part of Charleston’s history… thanks for asking.