Charleston is full of amazing places that make it such a wonderful place to live, visit and explore. Each week Glimpses takes a look at one of these special spots.

Just a block off King Street, one of the prettiest spots to stroll through in downtown Charleston is the College of Charleston. 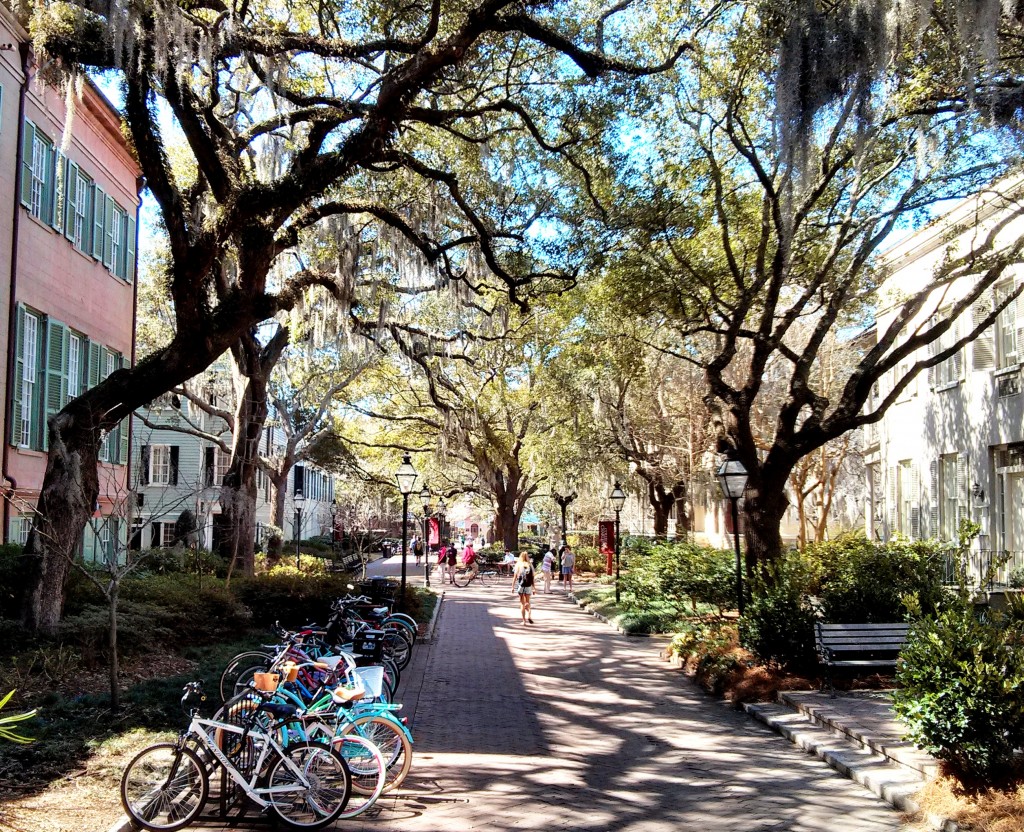 Commonly referred to as CofC or just The College, the College of Charleston was founded in 1770. As the 13th oldest college in the United States and the oldest south of Virginia,  it’s so old that three of its founders were signers of the Declaration of Independence and another three were framers of the U.S. Constitution.

The heart of the college is Randolph Hall and the Cistern Yard. Randolph Hall was built in 1828–29 and is one of the oldest college buildings still in use in the U.S. The Cistern hosts graduation (where the women wear long white gowns and carry roses, and the men wear tuxedos), Spoleto Festival concerts and other significant events. 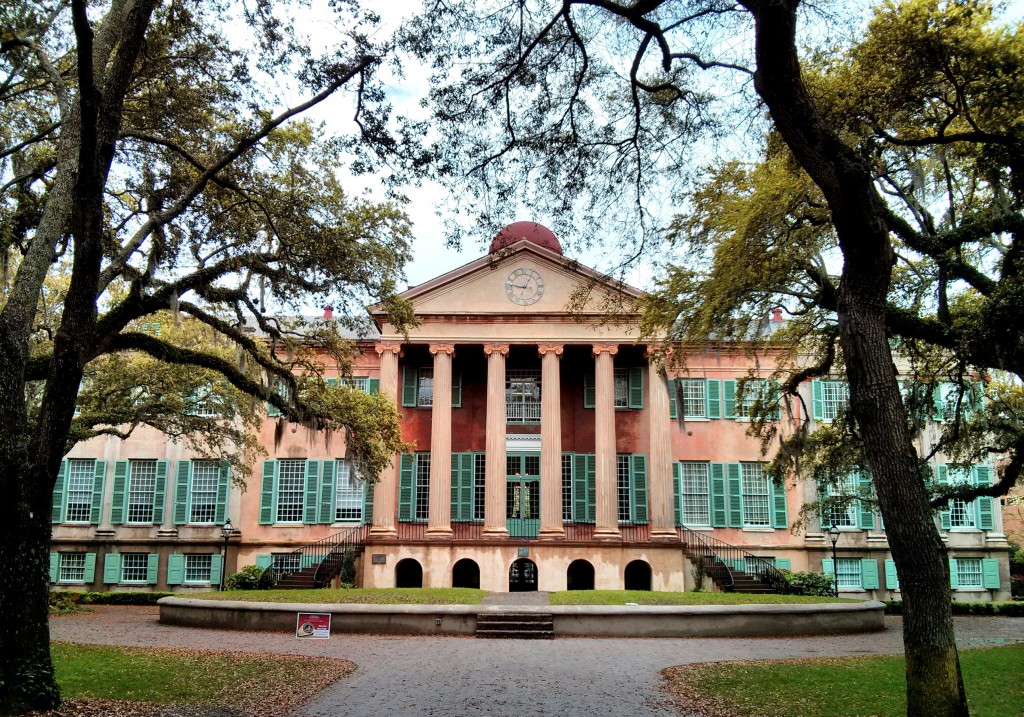 Home to about 10,000 undergraduates and another 1100 graduate students, CofC is spread over quite a few blocks of Charleston. 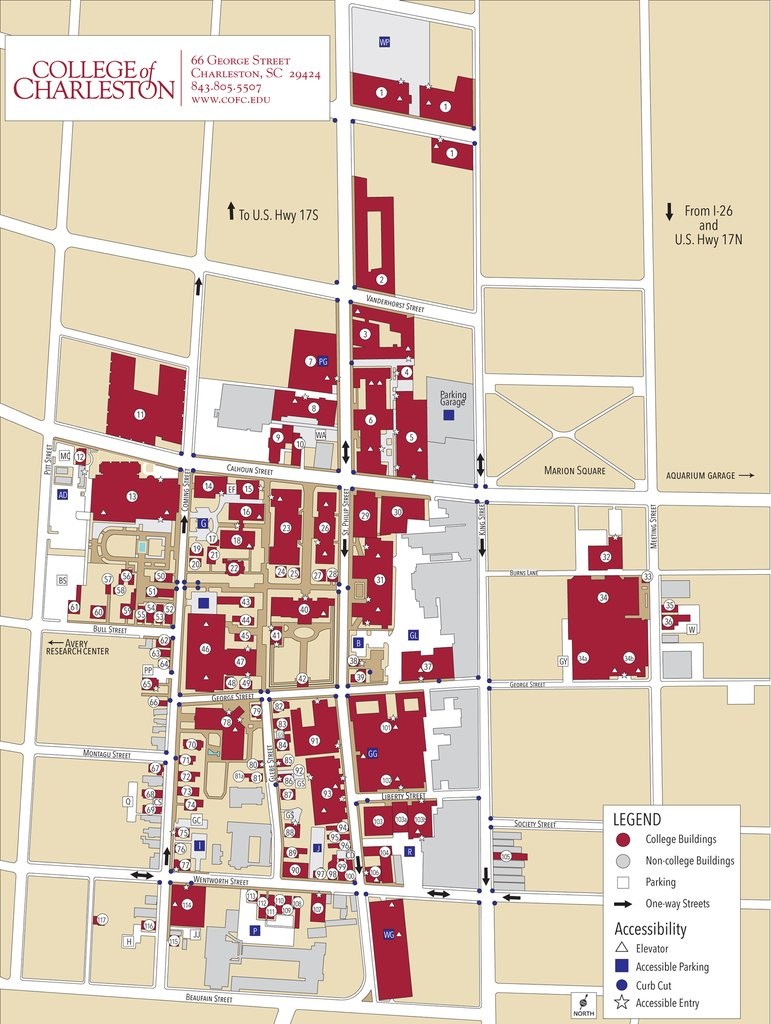 Within the campus there are many beautiful walkways and buildings to see. 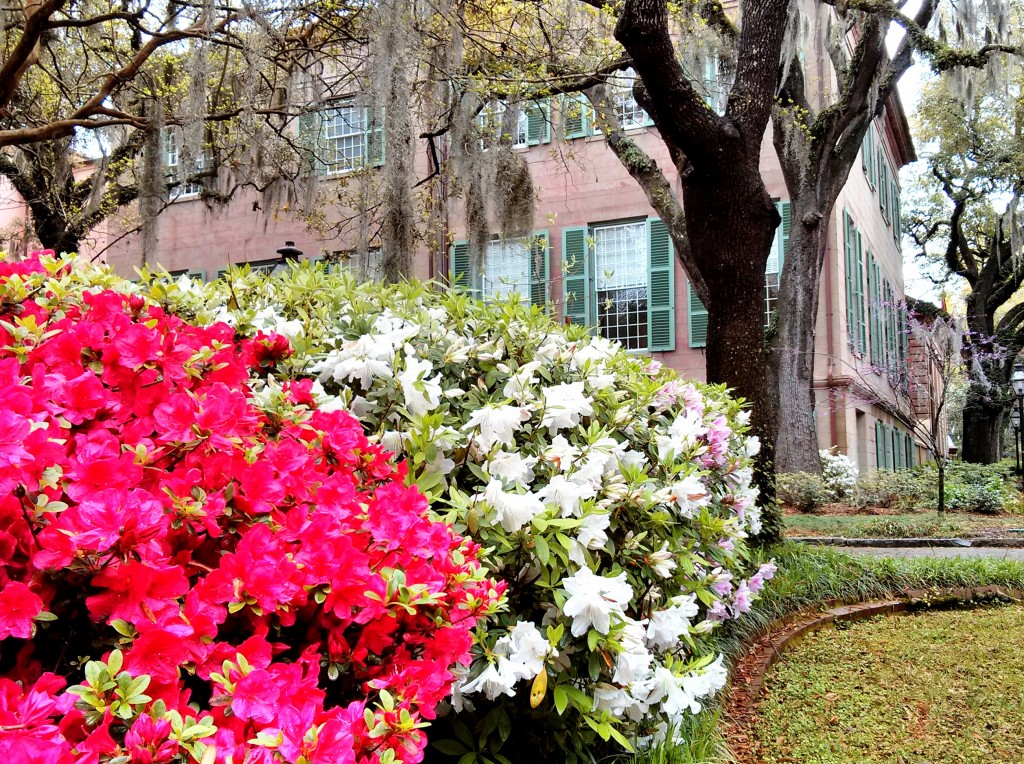 Take the time to visit the College…history is reflected everywhere. 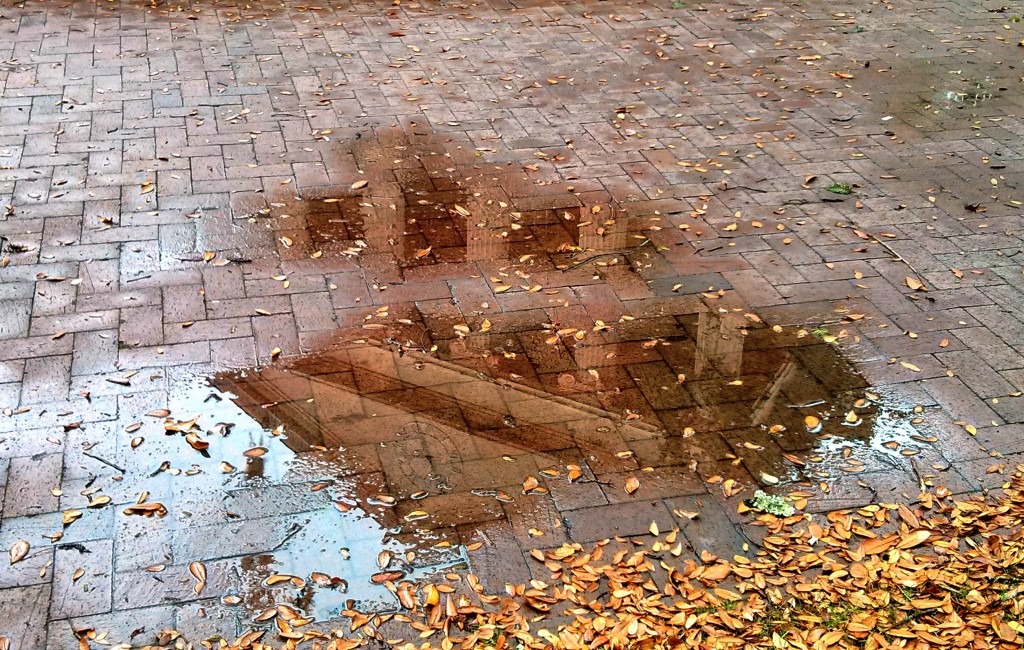 Charleston City Hall is a fascinating building and one that most people probably do not think to set foot in for something other than City business. It’s really worth the visit. 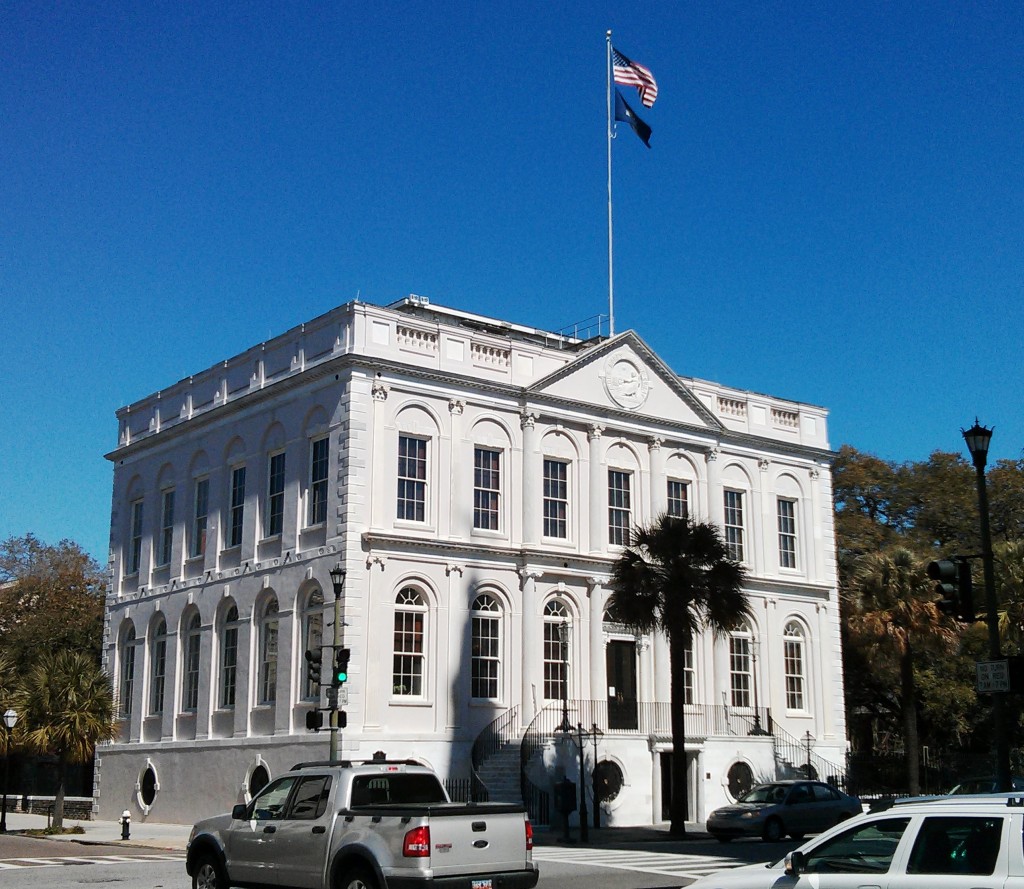 Built in the early 1800’s as one of the original branches of the First Bank of the United States, it became Charleston’s City Hall in 1818. Its primary function today is as home to the Mayor’s office and City Council Chambers. Various historical artworks are on display in the building, particularly in Council Chambers. The most famous piece of art is a painting by John Trumbull of George Washington during his visit to Charleston in 1791 — and, very significantly, Washington’s horse.

While renowned as a one of the best portraits of Washington, the thing that really distinguishes this painting is what Trumbull has the horse doing over the Charleston skyline. See for yourself: 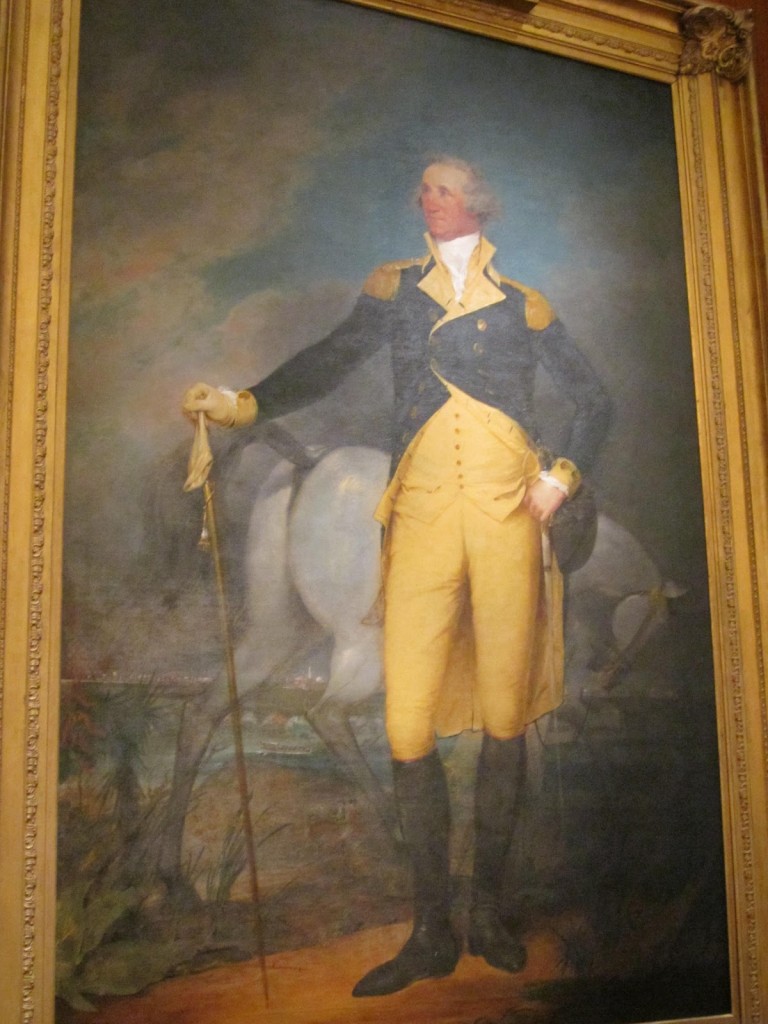 The story goes that Trumbull was so angered that his first painting had been rejected by the city fathers, after they had accepted his second effort he reversed the horse so it is about to relieve itself on the city!

The building also serves each spring as the opening stage for the world famous Spoleto Festival USA performing arts extravaganza. Dignitaries herald the opening of the Festival from the top of the building’s front steps each year. It’s always a wonderful day in Charleston. 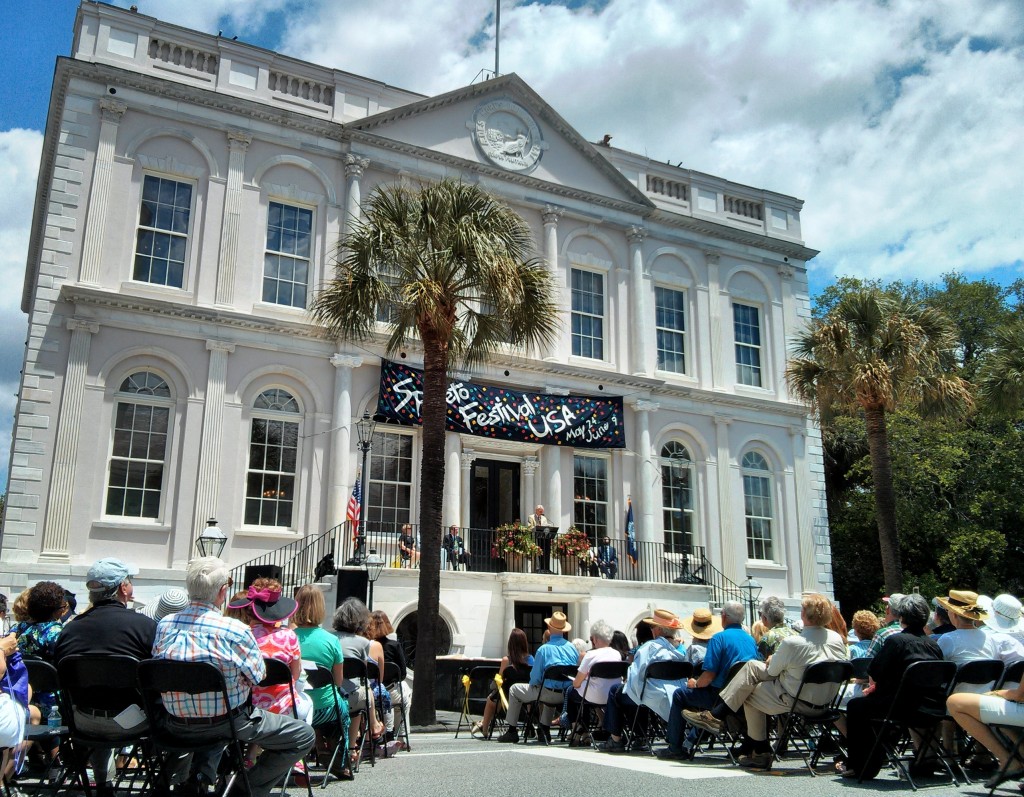 If you visit City Hall, you may run into it’s current most famous occupant, Mayor Joseph P. Riley, Jr. Now in his 40th year in office, not only is Mayor Riley the longest serving mayor in the United States, but arguably the most influential. Plus, he’s a huge baseball fan and a really nice guy. Here’s the Mayor in his office, posing for the official Glimpes portrait (no horses allowed). 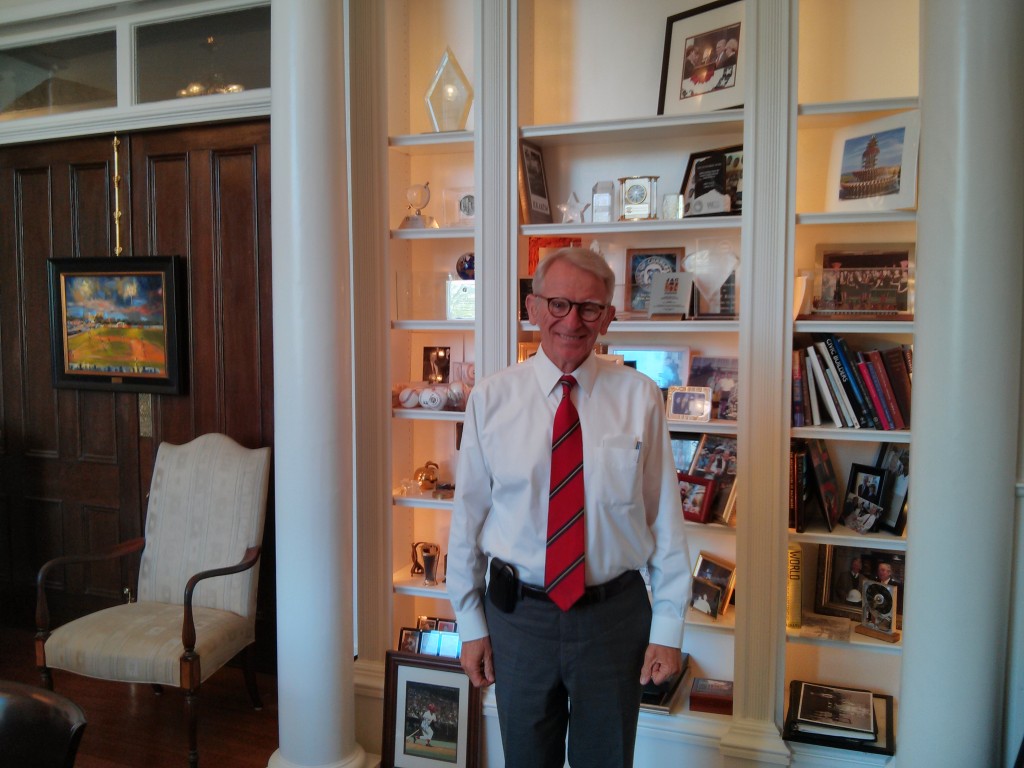 As one of the anchors of the famous Four Corners of Law, City Hall is located Broad and Meeting Streets intersect. Visitors are welcomed and encouraged. 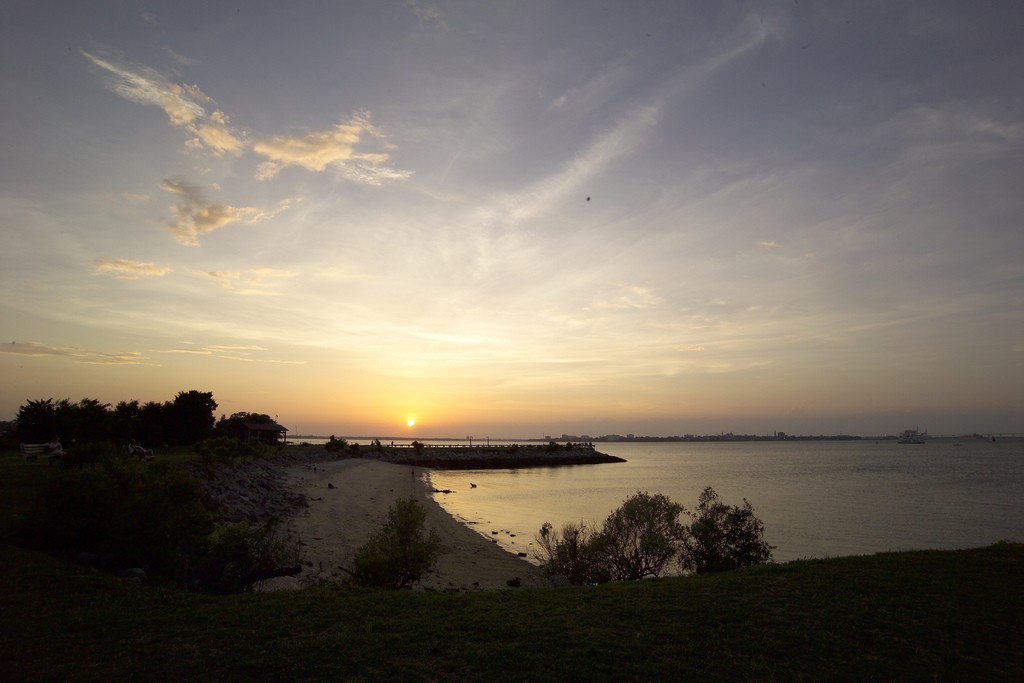 Located on James Island, about 7 miles from down Charleston, it’s perfectly situated for watching the sun come up (or go down) and for views of the harbor, peninsula or the Ravenel (Cooper River) Bridge — for which it has a dead-on view. 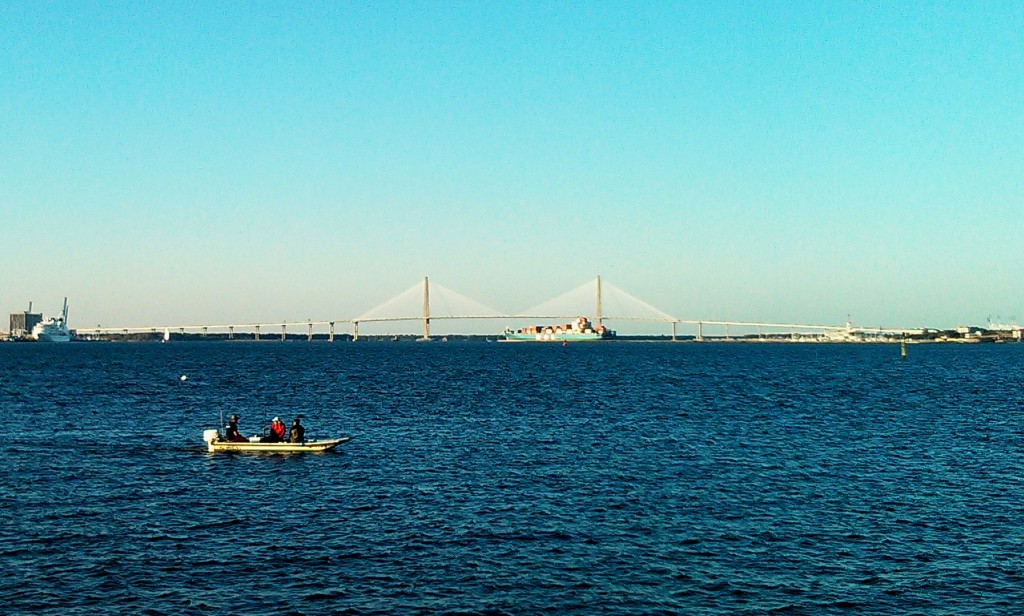 The park is is only about 4 acres in size, but has a 190 foot fishing pier connected to a 40 foot floating dock, two small sandy beaches, marshes, a covered picnic area, and a small pond, along with enough grass to romp on.

It’s worth the drive — there are no better views in Charleston.

The heart of Charleston, both geographically and in terms of action, is Marion Square. 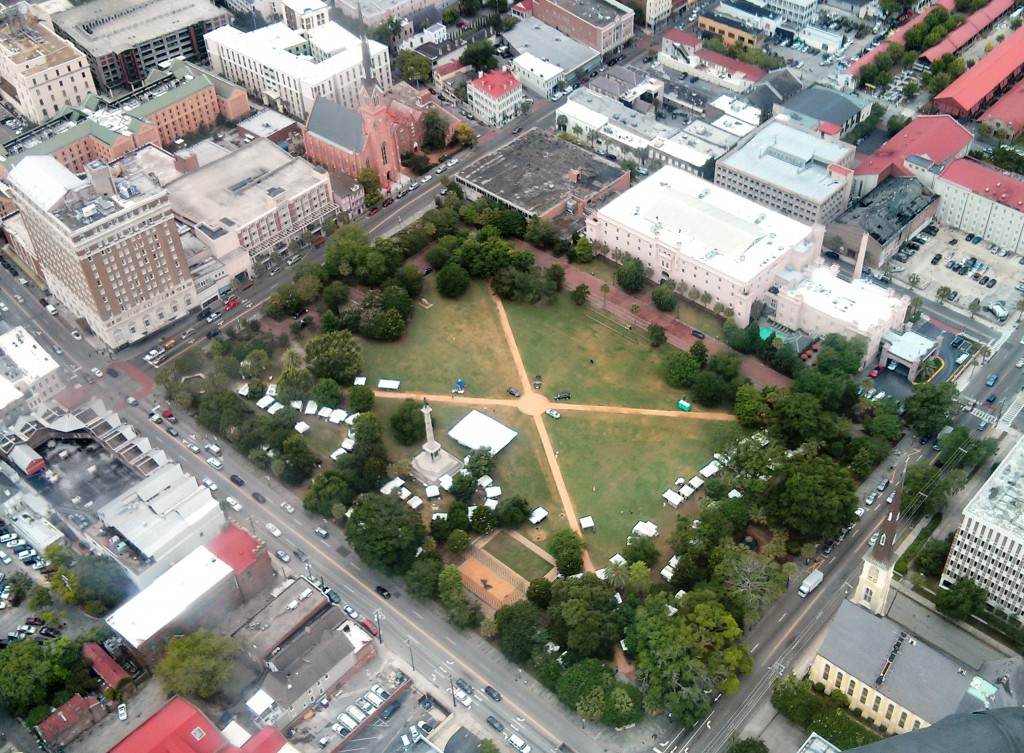 Named after Francis Marion (the Revolutionary War hero nicknamed the “Swamp Fox”), the Square is bounded by three of the major downtown Charleston Streets (King, Calhoun and Meeting) and the Old Citadel Building (now an Embassy Suites hotel) to the north. 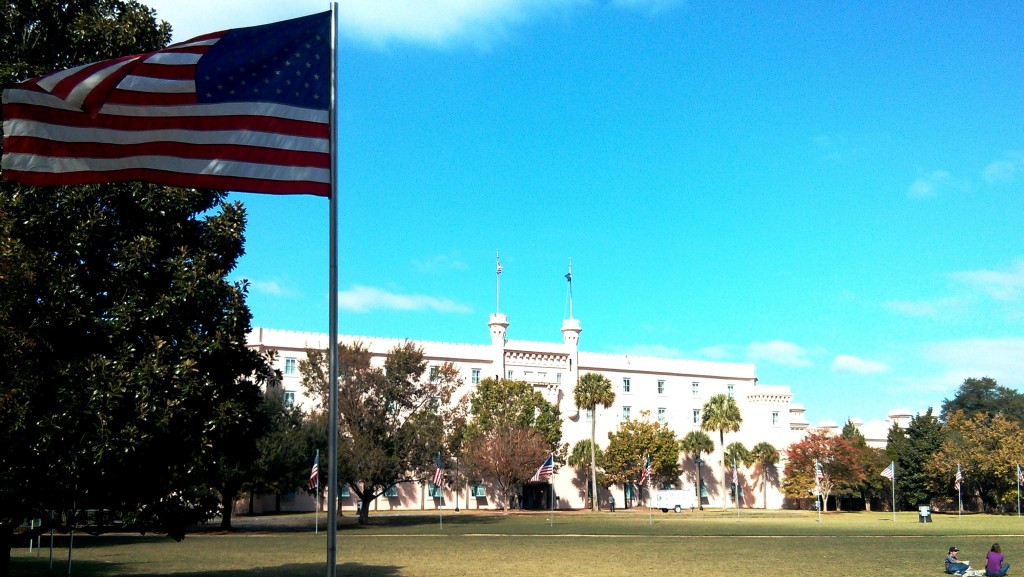 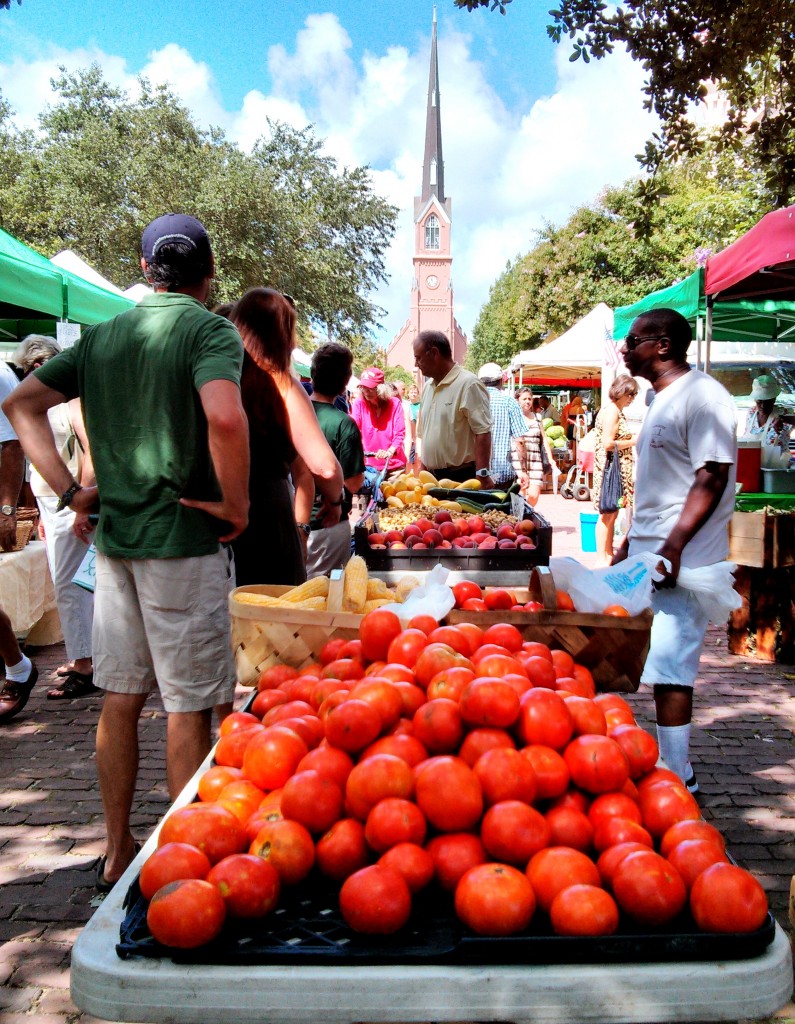 and many amazing short duration events (the Southeastern Wildlife Expo, the Piccolo Spoleto Arts Festival, the BBT Charleston Wine + Food Festival… to name just a few). It’s also well known as a popular “beach” for the locals and students at the College of Charleston.

The Square is home to many monuments, including the dominating statue of John C. Calhoun 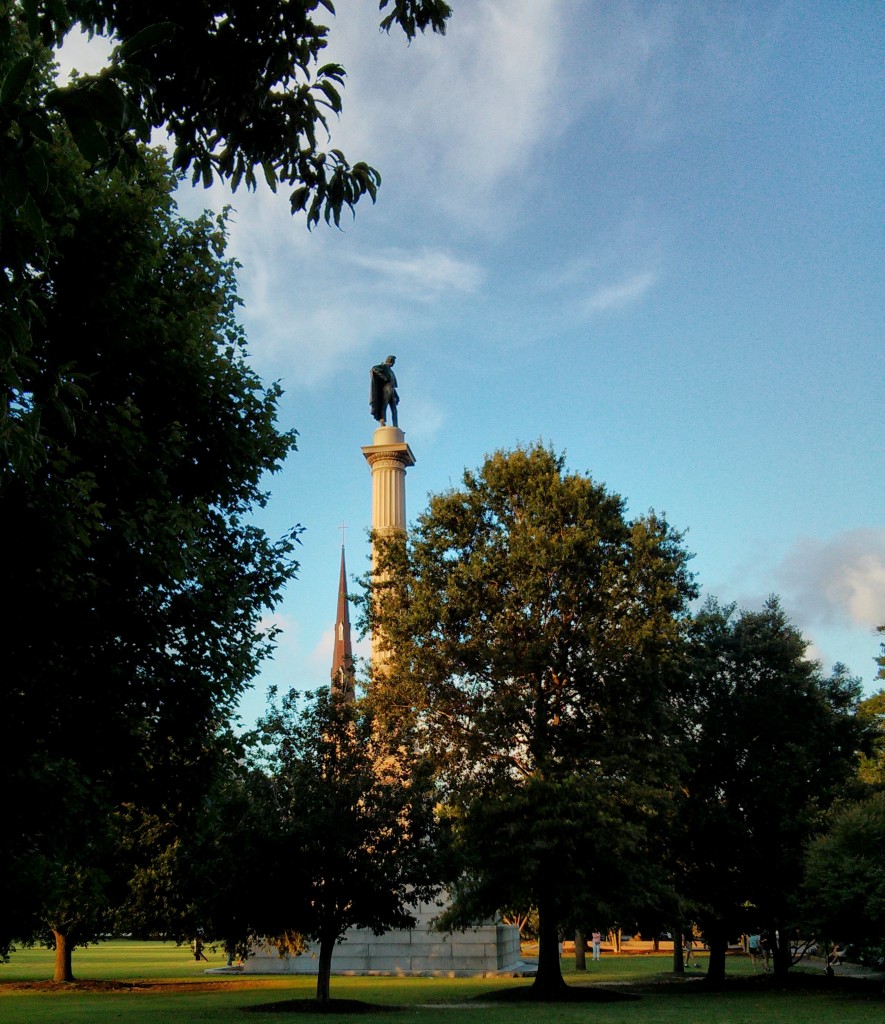 and a Holocaust Memorial.

It’s a great place to hang out, have a picnic or just watch the people go by. There’s even free Wi-Fi Internet access throughout the park to help you stay connected

You can walk to Marion Square from pretty much anywhere in downtown Charleston. Take a stroll and enjoy the Square.

Officially known as “The Citadel, The Military College of South Carolina,” the Citadel, founded in 1842, has a long and varied history.

the campus is now located on about 300 acres on the banks of the Ashley River. Home to about 2300 undergraduates, who make up the Corp of Cadets, the Citadel offers 20 undergraduate majors and 37 graduate programs.

As a residential college, the Corp lives in barracks on campus. While you generally cannot go inside the eye-catching barracks (made famous in Pat Conroy’s “The Lords of Discipline“), you can get a peek of their well-known colorful checkerboard interiors. 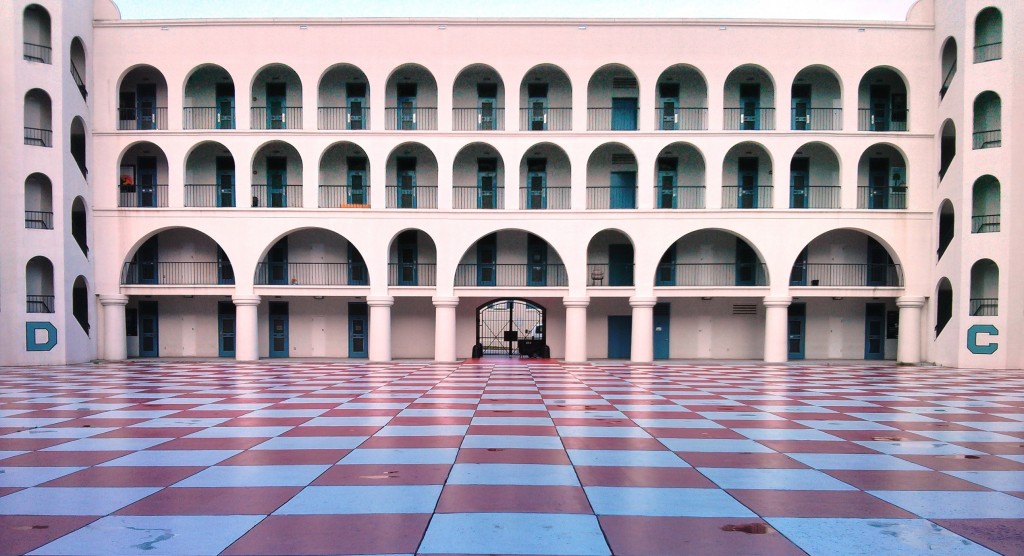 Open to the public, it’s worth the short drive from downtown Charleston to see the beautiful buildings, watch the knobs (the nickname for the members of the freshman class) zipping their way around at high speed and in straight lines, and — if you time it right — attend a parade of the cadets in their finest uniforms. If you’re in Charleston in the fall, you can catch a football game and get to meet the Citadel’s mascot… the bulldog. 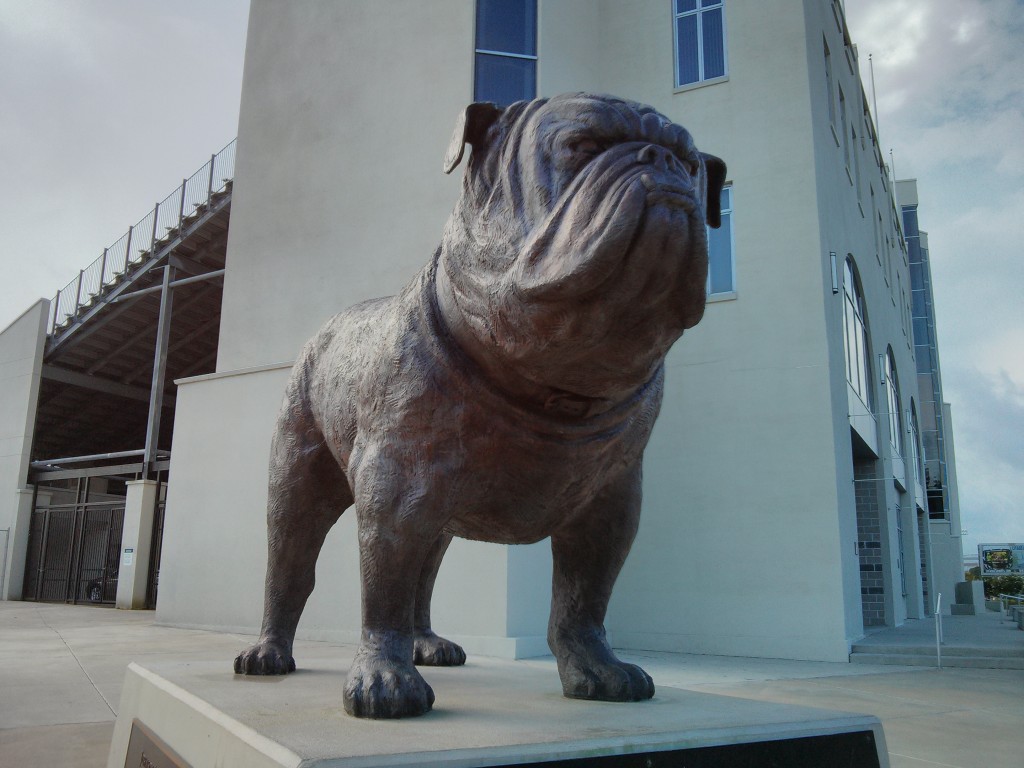 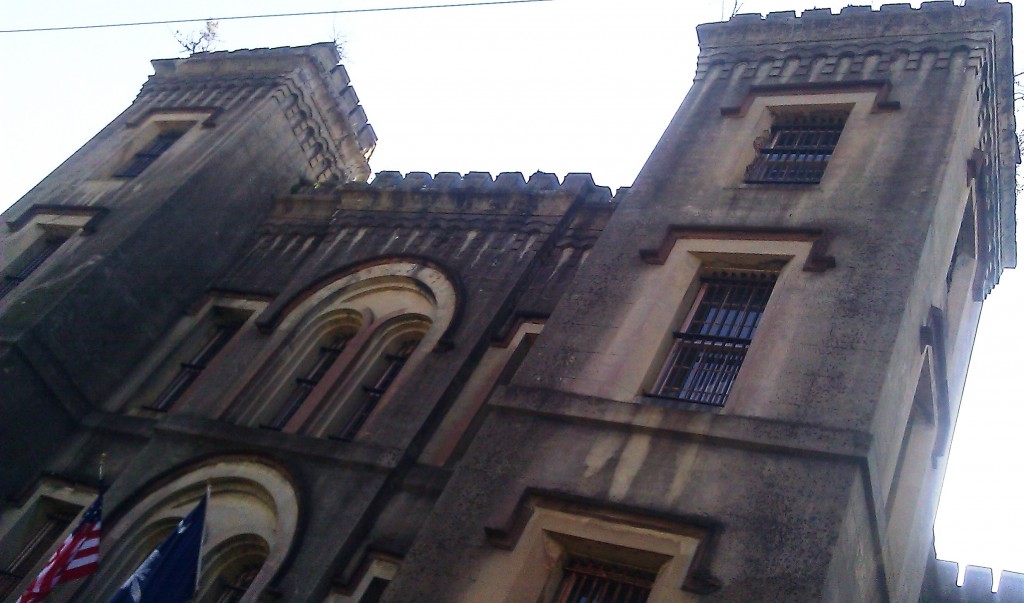 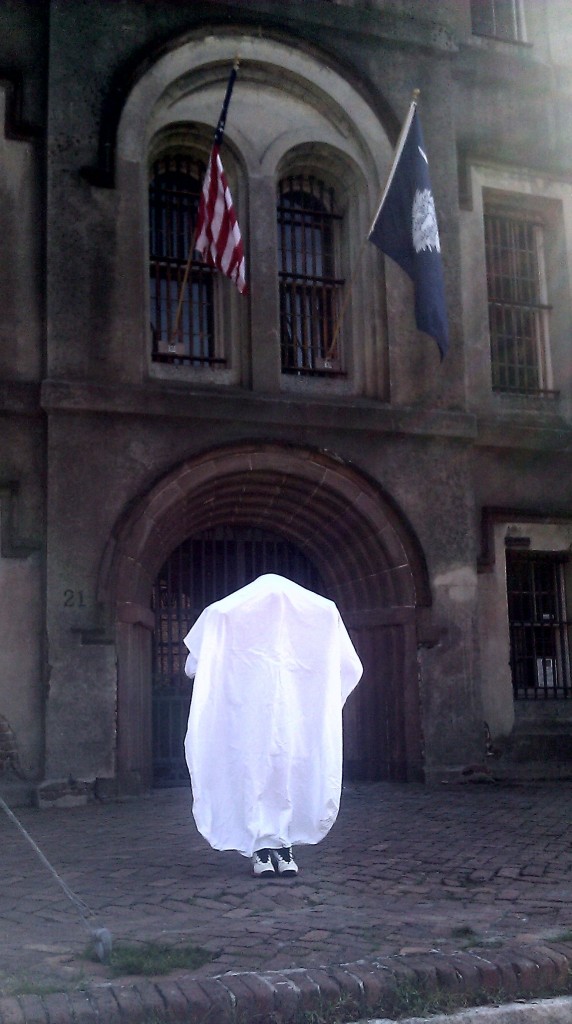